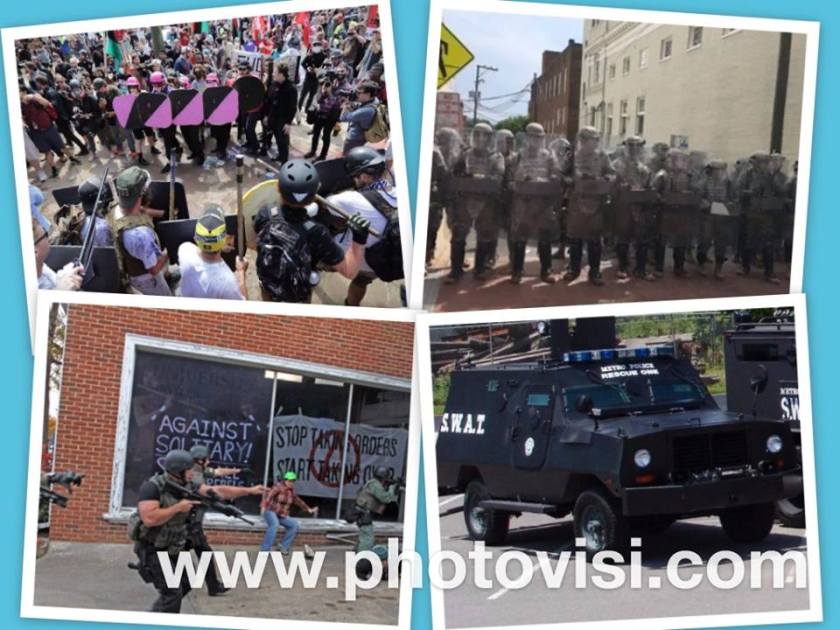 I am borrowing a link from Facebook Friend, Gary Hall. The post, which describes itself as an unbiased first-hand observation of the protests in #Charlottesville last Saturday (August, 12, 2017), is a little amateurish and incoherent. But I find it compelling because it is so patently honest and unbiased; patent not least because of its amateurishness and its incoherence.

I’m not going to say much about (1). The post includes photo’s I have not seen predominantly highlighted in the mainstream media. What I will say is that, taking into account the apparent reluctance of the police. I am surprised, not to mention relieved, that there were not more injuries.

I am really left unmoved by the narrative of any group or groupings who so clearly are spoiling for violence. And I don’t want to hear the line: well, it wasn’t all of us. If it wasn’t you, condemn the others publicly and vehemently. Refuse to be associated with them. Report them to the authorities. Hand over names. Otherwise you are a part of the culture supporting violence. Period.

I am more concerned though by the seeming behavior of the police. Look. I’m not stupid. If I was a police chief, I might well turn to a mayor and say: my boys want to go home unscathed. You’ve got two factions armed to the teeth. We ain’t getting in between them. But I have an itchy feeling that something else may have been at play here.

Those of you who know me will remember that I was tangentially involved in the activities of #OccupyChapelHill for a while. Met some thugs. But also met a swath of very interesting people, of all sorts of political beliefs, many of whom had very different perspectives to offer me.

Two very interesting matters flowed from #OCH. The first was the use by the local police, on a somnolent Sunday afternoon, of a militarily-outfitted SWAT team to throw out a bunch of black-dressed layabouts from an unused building in the center of Chapel Hill – population: 60,000 (pic bottom left above).

A couple of local worthies did a little poking about at the time. And they turned up the information that there was some sort of law enforcement conference taking place in Chapel Hill that weekend. Folks from unspecified law enforcement agencies, gathering somewhere unspecified, to talk about matters unspecified. All very Dick Cheney.

The point was that, to the extent that there was any information offered about this gathering. It was confirmed that the law enforcement ‘guests’ were ‘observing’ the occupied building on the Saturday, along with their hosts. That said law enforcement guests left town late Sunday afternoon. But no-one was prepared to say what they were doing for the rest of Sunday (the SWAT team activity took place Sunday afternoon).

Why did this catch the attention of some of us? Well, we figured that, if the hosts were up to their armpits first surveilling said occupied building, then planning a SWAT intervention, and then undertaking said SWAT intervention. Said guests might have been at loose ends. And might have wanted to go home. Unless. They weren’t at loose ends. Unless. Their appearance in Chapel Hill that weekend was no accident.

When one or two of us suggested publicly that perhaps one or two of those guests might have been among those wearing SWAT helmets on Franklin Street, in somnolent Chapel Hill, that Sunday afternoon, there was a resounding silence. We never were told what said ‘guests’ did to pass the time, while their hosts were otherwise ‘occupied’ (Geddit? ‘Occupied’? Oh why do I bother?).

The second matter of interest was the discovery that #OrangeCounty (in which Chapel Hill, NC is situated) apparently had possession of possibly more than one police armored personnel carrier (pic bottom right above). I wrote about both issues on a local political forum. If you’re at all interested in what I wrote in that post, you can find more posts on the same subjects by searching the #OrangePolitics site with my name.

I later appeared on a chat show on our local community radio station (#WCOM – on which I used to have my own community chat show; who need money; and so a quick shout-out to all of them). On that show, a gentleman, whom I regard as having credibility, told me that he had seen a warehouse within the boundaries of Orange County, allegedly containing all manner of military equipment, stored apparently for use by local police forces.

I say all of this very carefully. But, having said it carefully, it leaves me concerned. And left me so at the time.

There was some not inconsiderable discussion at the time of #Occupy – not in the mainstream media, of course – as to whether or not Occupy may have been used as a target for police agencies around the nation, supported by other centralized institutions, to experiment with certain public security and control techniques.

I knew then, and know now, that such discussion is on the very edge of tin-foil territory. So, with my lawyer’s training and natural skepticism, I approached any and all such discussion with a beady eye as to evidence.

I have offered what I witnessed and was told about Orange County, NC. I will say that, if one wants to impose a greater level of order in a society, one of the textbook ways to set it up is to ‘permit’ disorder. And there is something about Charlottesville that smells in this regard.

More than that, have a look and find out for yourselves.

I am a dual British-American immigrant to the United States. Where I have lived for some 25 years. Mostly in disadvantaged areas of the South. I deplore racism. Dislike all -isms. Advocate against hate and violence. But in a manner that eschews hypocrisy. View all posts by hatenoonegeoff

I am a dual British-American immigrant to the United States. Where I have lived for some 25 years. Mostly in disadvantaged areas of the South. I deplore racism. Dislike all -isms. Advocate against hate and violence. But in a manner that eschews hypocrisy.